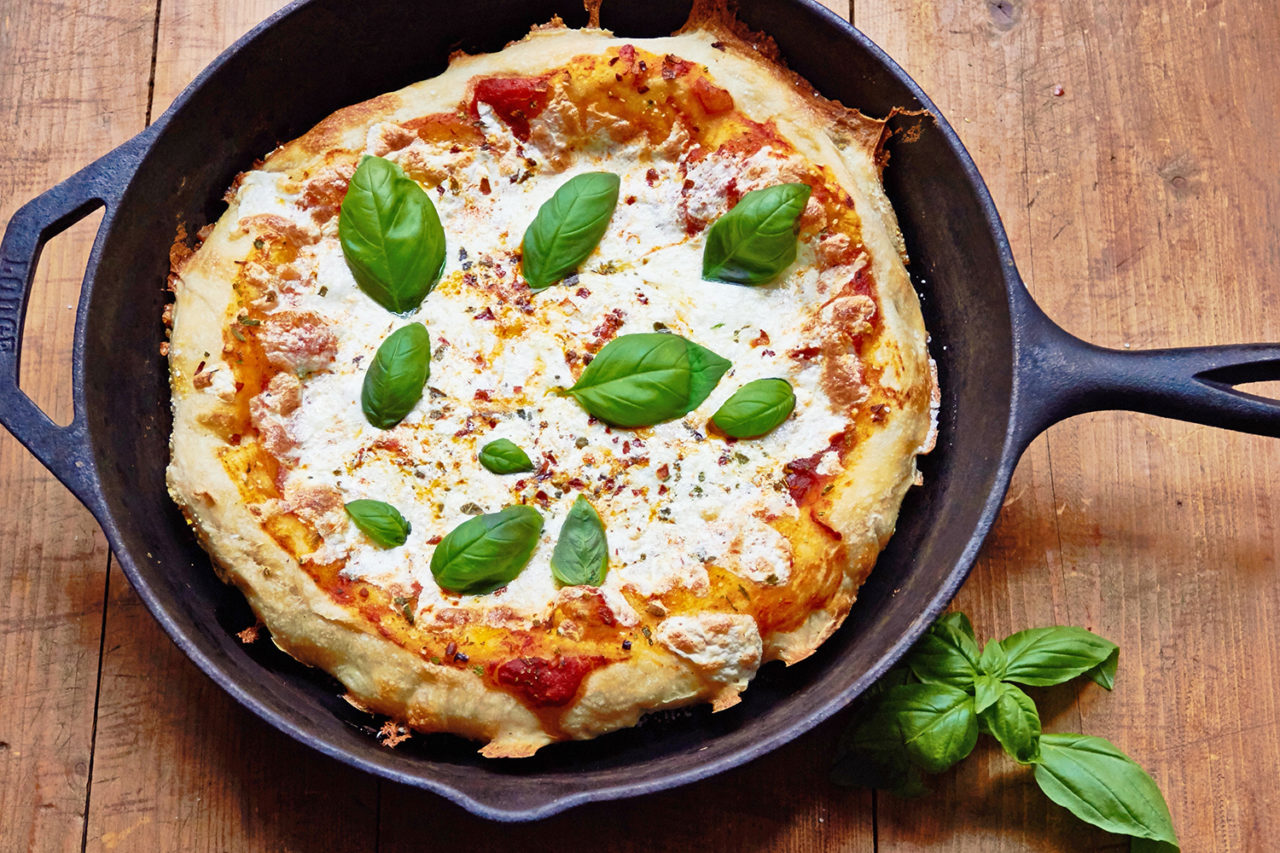 Published On: 20/08/2014By MunchkinsCategories: Recipes

In a saucepan, combine the cream, water, butter, and salt and bring to a simmer on med/low heat. You want to get it to the point that it’s starting to bubble, but not boiling. In a large bowl, add the tapioca starch. When the cream/water mixture is heated, add it to the starch and stir it all together. It will start to clump together, which is fine. Let the mixture cool for five minutes. As it cools, preheat your oven to 500 degrees.

Add the beaten egg to the mixture, and knead together with your hands. Add the cheese, white pepper, and oregano, and mix together until it’s dough-like. This is enough dough for two pizzas.

Split the dough in half, then stretch it out into the thinnest frisbee possible. It will likely tear if you stretch it too far, so just pull it as far as you can. Put the dough in a cast iron skillet, spreading to the edges of the skillet with your fingers. Try to get it as thin as possible – this is important so as to not make your crust too chewy. With a fork, poke some holes through the dough to let air pass through.

Bake in the middle of your oven for six minutes, then take it out and put it on your stove (keep the oven on!). The dough may bubble up a little while cooking, which is fine – it’ll go back down once you take it out of the oven. It’s hard to tell in this picture, but the dough will have taken on a more bread-like consistency at this point. This step is important because it gives the dough time to cook through without burning the toppings.

Add the 1/4 cup of sauce. Might I suggest a blended version of my homemade Superior Spaghetti Sauce?

Add the toppings, whatever you’d like. You can go with a standard topping fare like in the picture above, or try something more unique like a cheese-less pizza (often referred to as Pizza Marinara) or another favorite – Pizza Bianca, which is basically just dough, olive oil, salt, and rosemary, a popular style of pizza in Rome.

Throw it back in the oven and cook for another 8-10 minutes, until the cheese starts to brown. For extra crispy toppings, broil it for the last minute or two of cooking.

That’s it! Bear in mind that while this is the best gluten-free pizza crust I’ve ever tasted, the inside of the dough will still be slightly chewy – mostly due to the nature of tapioca starch. I assure you, it’s not undercooked!

This pizza also cooks well on a pizza stone, or just a plain baking sheet if you’re desperate for some delicious pizza.